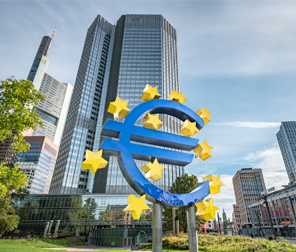 New ECB Leadership: What to Expect From Madame Lagarde?

In a “package deal” to fill a number of top positions in Europe, European leaders have recommended International Monetary Fund (IMF) Managing Director Christine Lagarde to succeed Mario Draghi as President of the European Central Bank (ECB) in November. How will she change the ECB and monetary policy?

Christine Lagarde is an accomplished lawyer and politician, having built a track record as French Finance Minister before taking the helm at the IMF in Washington DC. She does not have any formal training in economics, however, and, contrary to previous ECB presidents, she does not have practical experience in central banking, which makes it harder to gauge her views.

Judging from IMF output under her guidance, we think Lagarde’s views are likely to be similar to Mario Draghi’s: on the dovish side of the spectrum, at least for now. For example, a very recent IMF staff statement notes that “if the inflation outlook is downgraded further, even greater accommodation will be needed.” While this is, strictly speaking, the country team’s view and not Lagarde’s, her take is unlikely to be substantially different in the sense that the Managing Director is the head of IMF staff and all staff positions are reviewed by the management team. Moreover, we take note of a recent report by the IMF’s Independent Evaluation Office that studied the IMF’s advice on unconventional monetary policies and found that the “response to the developments has been wide-ranging and in many respects impressive.” The report also highlights, however, “the absence of deep expertise on monetary policy issues.”

That said, Lagarde’s legal background might come in handy for some of the decisions she may have to consider sooner rather than later, in particular with regard to relaxing some of the self-imposed limits on securities purchases if the ECB were to decide to restart the Asset Purchase Programme (APP). Moreover, she is clearly a respected consensus builder and has been playing an important role in global policy circles for more than a decade, including during the European sovereign crisis in 2011/2012.

Her appointment raises questions about the composition of the Executive Board and the insulation from political interference. Genuine central banking experience has become increasingly scarce after the recent appointment of Luis de Guindos, another former finance minister. This will automatically raise the profile of ECB Chief Economist Phillip Lane, a respected economist and former governor of the Central Bank of Ireland. By the same token, the replacements for Benoit Cœuré and Yves Mersch will require significant economic experience to protect the ECB as an institution. The question is ultimately whether Lagarde will be an opinion leader at the ECB in the same way Draghi has been.

Last, while we don’t think this will be the case, Lagarde’s transition to the ECB could still be derailed: the European Council needs to consult the European Parliament and the ECB’s 25-strong Governing Council before her appointment. The Governing Council might take issue with her lack of experience in “monetary or banking matters,” as required by the European Treaties. Parliament, on the other hand, might balk at some of the other elements of the “package deal,” which could, in turn, also put her candidacy in jeopardy.